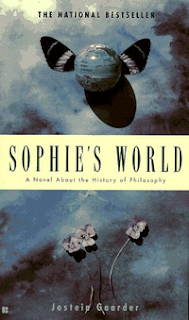 ‘He who cannot draw on 3000 years is living from hand to mouth” as noted by famous German writer, Johann Wolfgang von Goethe, “Sophie’s World” is a must read book for everyone. Written by a Norwegian writer Jostein Gaarder this meta-fiction is a concise history of philosophy. As we read this novel the author wants us to plunge into the mysteries and riddles of this universe, not least the one, “Where did this universe come from?” Did it come from nothing or has it always existed?

Sophie Amundsen, an early teenager, returns home from school to find a mysterious letter from a stranger questioning her “Who are you?” As their interaction progresses the stranger introduces himself as a philosopher but prefers to remain anonymous for his other details. He offers Sophie, a philosophy course and they discuss the history of past 3000 years including the biographies of famous Greek philosophers, Heraclitus, Democritus, Socrates, Plato and Aristotle to name a few. They discuss about the Middle Age when the philosophy intertwines with the religion and later revives and flourishes during the Age of Enlightenment and the Renaissance. When the course approaches the end, author reveals that all these characters are nothing but fictitious in the mind of Albert Knag, a Major of the UN Peacekeeping force in Lebanon, who is writing a book called “Sophie’s World” to teach philosophy to his daughter, Hilde Moller Knag. She gets this book as a birthday present from her father and reads it completely. The same day was a birthday of Sophie, when Sophie and her philosophy teacher plan and succeed to come out of the Major’s imagination and live an eternal life.


The mysterious philosopher identified as Alberto Knox is an imaginary portrayal of the Major himself and Sophie his daughter because they have many characteristics in common. However, the imaginary characters come alive later by escaping from the imagination of the Major and become immortal like Alice, Cinderella, Hansel and Gretel, and so on. Even then they cannot interfere with the life of others especially that of Major and Hilde as they could not be seen or felt or heard.

The author has presented this novel by means of meta-fiction, a fiction within a fiction, to make the puzzles, riddles, and mysteries of this universe livelier. Writing from the wondering and speculative perspective of children is the specialty of the author Jostein Gaarder. Meta-fiction is his most preferred genre.

In conclusion, this book is very informative and unique, possessing the characteristics of a must read book. Read it yourself to empathize with the wondering eyes of Sophie and to acknowledge the mysteries and wonders of this universe.

Popular posts from this blog

September 11, 2015
(Image Credit: Unknown) A continuity to the Tradition: Like in the past, I am attempting to predict (so to say) questions that could show up in the upcoming October/November examination of 2015. Disclaimer First: These predictions are in no way scientific or really probable. Justification: However, these could be some topics you could brainstorm and practice upon, in order to prepare for your General Paper exams.
57 comments
Read more

Consider the view that the key to good health is not medicine, but lifestyle

August 21, 2012
Image by Irina L from Pixabay "Health is a state of complete physical, mental and social wellbeing, not merely an absence of disease or infirmity." - World Health Organization. This definition of health in its broadest sense implies that curing of physical diseases and abnormalities alone cannot earn us a good health. Can medicines go beyond curing diseases, to improve our health on the mental and social grounds? The medicines for the mental diseases, like depression, might improve our mental and social health to some extent; however, good health in its broadest sense can only be achieved through improved lifestyle.
1 comment
Read more

October 12, 2012
Disclaimer Notice First First of all, I would like to share something with you: I have tried to guess probable questions like this for four sessions with this one being the latest and in my past guess-works, what I have experienced is that most of the students blindly rely on them and prepare only on the topic areas listed here. And when the questions do not fall from the areas I have listed there they simply show aggression. One person wrote in my Facebook Group in a satirical manner that, “100% questions were asked from my predicted topics.” Now, read an article on another blog. Ms Adrienne de Souza writes how students get tricked by reading probable questions. She frankly says that her predictions have been wrong before , like mine! And I've always included "a note of warning/disclaimer" in each of the earlier predictions.
28 comments
Read more